Pope Francis spoke for the common good on Christmas Day when he called for the world’s nations to ensure that those who are poor receive their fair share of the vaccine for the coronavirus. 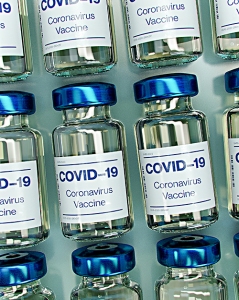 “We cannot allow the various forms of nationalism closed in on themselves to prevent us from living as the truly human family that we are,” the pope said. “Nor can we allow the virus of radical individualism to get the better of us and make us indifferent to the suffering of other brothers and sisters.”

The pope’s words were widely reported, but global leaders reacted with silence. Distribution of the vaccines within nations is highly politicized. The suggestion that countries might share their allotments with the poorest of the poor would drive the political temperature even higher.

The pope was correct in stating that nationalism is a major barrier to the human family acting as a family. The fullness of the human person is found when by reaching out beyond our individual selves and our national borders. However, our capacity for self-giving love is in a constant tug-of-war with the desire for personal and national security. Dare we share with those who have less? Will we leave ourselves short as a result?

Further, the pope spoke of indifference to the suffering of others. Ten months into this pandemic numerous stories of grace and tragedy have been told. At some point, our hearts may grow cold; the stories may no longer stir empathy.

Still, the stories we hear are mostly from our own nation or other wealthy countries. Little reaches us from the developing world. In part that is because major news agencies have fewer reporters based in the poorer nations than in previous times.

As well, basic record-keeping is a low priority in such countries. For example, most African nations have no death registries, no accounting of how many people have died or of the causes of their death. A Jan. 2 New York Times report, “A continent where the dead are not counted,” pointed out that by mid-November, the Sudanese capital of Khartoum had registered 477 deaths resulting from Covid-19. But researchers believe a hidden outbreak left another 16,000 people dead from the virus. Who will tell this story?

The world’s wealthiest countries have long acknowledged their responsibility to help developing nations. More than 50 years ago, many of these countries, including Canada, promised to provide 0.7 per cent of their gross domestic product to overseas development assistance. In 2019, Canada provided only 0.27 per cent of its GDP in foreign aid, a number which includes the cost of refugee settlement in Canada.

To date, countries with 13 per cent of the global population have laid claim to more than half of the available vaccines for Covid-19. Canada has purchased far more vaccines than it can use. What do we intend to do with the surplus?

Despite 10 months of restrictions, the pandemic is far from over. We have not seen the worst of what might happen. Food supply chains still function well, and medical systems have not collapsed. Food shortages could lead to anarchy – every person fighting for themselves. In such an event, the political will to share anything, let alone vaccines, with other nations will be minimal.

Even without a worst-case scenario, developed nations will have huge public debt to contend with beyond the pandemic. Mental health issues will endure. The economy will be in a deep pit, and millions may be unemployed. Canada will have its hands full. One should not ignore the vast domestic issues we face.

Still, humanity is a family. Until the pandemic is ended everywhere, it will remain a threat to all. In this instance, the common good is also the individual good.

If we become aware that the world must act collectively, we may be able to move forward. We are all in this together. Realizing that and acting upon it will require a prodigious commitment. A global conversion to acting as a global community is needed. The virus of individualism must be slain, and the recognition that all are brothers and sisters will have to become uppermost.

We are not at that point yet. We still cling to our own interests and hope for a return to the way things were. Yet, what we used to regard as normal is gone. Sharing vaccines will be the first step we must take. Together.