Gospel for Fourth Sunday in Lent

The man born blind is each of us. Watch how this nameless man grows in maturity, indeed Christian maturity, throughout the healing story in John 9 (1-41). 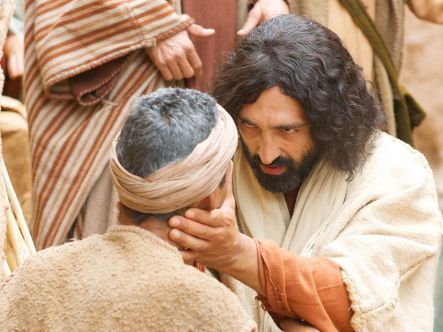 The man was born blind, Jesus says, “so that God’s works might be revealed in him.” God’s work here is not only the miracle of giving him physical sight, but also the even-greater miracle of human and spiritual development.

As the man becomes more attuned to Jesus through his increasing awareness of Jesus’ identity, he also gains a share in Christ’s mission. Further, he grows from a silent, almost inert person to one who is fully alive. The high point of his coming alive is his saying, “Lord, I believe,” followed by his worship of Jesus.

This is a Lenten story for a reason – it is a coming to Christ through Baptism and then being sent forth on his mission.

The process begins with Jesus mixing dirt with his saliva – an outpouring of his life – and spreading the mud on the man’s eyes. Translations other than the New Revised Standard Version used in the Canadian Lectionary use the word “anointing” here.

Jesus then sends the man off to wash in the pool of Siloam, which John translates as “sent.”

All of this takes place on the Sabbath which resonates into two ways – it stirs the condemnation of the Pharisees, but also links the baptismal imagery with the fullness of creation. The Pharisees are irate, but the man becomes more fully alive. He who, before encountering Jesus, could barely utter a sound now challenges the Pharisees – “How can a man who is a sinner perform such signs?”

The man’s articulacy soon leads to his being cast out of the Temple. He understands Jesus first as a man (v 11), then a prophet (v 17), then as “from God” (v 33) and finally as the Son of Man (v 38). He becomes too much for the Pharisees. Jesus, however, finds the man who then makes his profession of faith and his act of worship.

The story may be literally true, but it is its symbolic value that carries weight in the Gospel.

Each of us is the man born blind; each of us needs to be anointed and baptized by Jesus and then sent into the world on mission. We do not arrive fully formed, but become more completely human – more able to courageously proclaim what we see – as we become attuned to Jesus through the Holy Spirit.

The story of the man born blind is a journey story, a proclamation of the Good News in his life and through his actions. We are invited to participate by attuning ourselves to the music played by the divine chorus conducted by Jesus.

(This article draws upon the analysis in The Gospel According to John: A Literary and Theological Commentary by Thomas Brodie.)