William Cavanaugh: Help those God throws in your path

Special to the Prairie Messenger

EDMONTON – The parable of the Good Samaritan should be seen as a call not to help everybody, but to help anybody, “anybody that God throws in your path,” says political theologian William Cavanaugh.

Key to understanding the parable is the realization that the Samaritan rescues the wounded Jew, not because of a moral obligation, but because “he felt a movement in his entrails. It was a gut reaction,” Cavanaugh told a crowd of several hundred people at The King’s University Jan. 19. 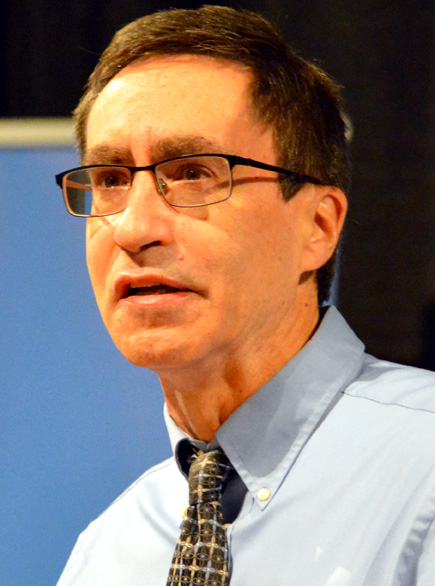 The modern tendency is to see the Good Samaritan story as pointing to a universal command to love others – “my neighbour is everybody,” he said. But such an approach leads to an institutionalized and depersonalized societal response to poverty and suffering.

Instead, “networks of living concern” are needed in which people help suffering people they encounter on a one-to-one basis, said Cavanaugh, director of the Center for World Catholicism and Intercultural Theology at DePaul University in Chicago.

He was speaking on the political meaning of the Church at a conference on Canada’s 150th anniversary, “Glorious and Free”?! Generous Citizenship for the Next 150, at The King’s University in Edmonton.

Cavanaugh made many of his comments in a sort of dialogue with the ideas of Ivan Illich, an Austrian priest, author and activist of the 1960s and ’70s, who opposed what he called “the war on subsistence” – large-scale development projects “which were always supposed to lift people out of poverty but always made life worse.”

Illich defended “the ability of ordinary people to make a life for themselves,” despite the efforts of institutions ranging from development agencies to the Church “to improve people,” he said.

Illich also emphasized “the radicality of the Incarnation” in which God took on human flesh to create “a network of particular people,” not a universal brotherhood of humanity, he noted.

The Church, Cavanaugh said, has a different goal than the state. It aims to lead people to find the centre of their spiritual lives in these networks of concern.

“The end of the Gospel is incorporation into the Body of Christ which includes all people, not just Christians.”

The state, meanwhile, seeks to liberate people from all forms of dependency – the poor from charity, employees from employers, wives from husbands, children from parents, and aging parents from their children, he said.

When people want to be autonomous, charity threatens autonomy and becomes a form of humiliation, he said. The only way to overcome the humiliation is for the state to depersonalize acts of charity.

St. Paul, however, maintained that all are equal in the Body of Christ, even though some are weaker. In fact, God arranged the Body so the weaker members receive greater honour, not humiliation, Cavanaugh said.

Paul also wants the strong to see that they depend on the weak for their existence.

Another risk of personalized charity is that boundaries break down between the strong and the weak, he said. “Far from merely protecting recipients (of charity), bureaucratizing charity immunizes the wealthy classes from the messy and potentially life-altering encounter with people who suffer.”

Crucial in the last judgment scene of Matthew 25 is that Jesus identifies with those who suffer, not those who provide help. “The victims of this world are divinized.”

Cavanaugh stated the emphasis on personalized charity does not mean government programs helping the poor and hungry should be abolished. But the Church should say such programs are a lesser good than the direct personal care of the suffering.

“Government aid is a safety net; it’s not the kingdom of God.”